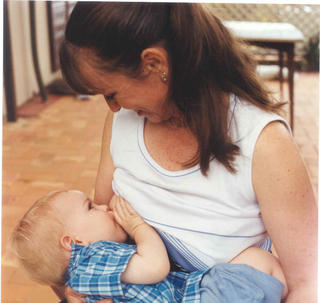 According to a recent article published on Forbes.com, “The longer a mother breast-feeds, the higher the fat and energy content of her breast milk.”

“This is the first study to analyze the fat and energy content of breast milk of mothers who breast-feed for longer than a year,” said study co-author Dr. Ronit Lubetzky, who is with the department of pediatrics at Dana Children’s Hospital at Tel Aviv Sourasky Medical Center in Israel. “There are more and more women who choose to breast-feed for longer time periods, and not many studies about the nutritional value of their milk during this prolonged lactation.”

“This is a nicely done study which looked at a question that really needed to be answered,” added Dr. Ruth Lawrence, a professor of pediatrics at the University of Rochester School of Medicine and a member of the executive committee of the American Academy of Pediatrics’ section on breast-feeding. “I think many people’s general impression is if you continue to breast-feed beyond a year, probably the nutrient value drops, and this is quite different information and very important.”

It’s very exciting to see that there are FINALLY studies being done on nursing past 12 months. I know many cultures have been practicing extended nursing for ages, but perhaps as more and more women do so in the Western world, we’ll see more studies of this sort.

I think it’s especially valuable because many people (including doctors – I know from personal experience) think that after 12 months, there’s no or little nutritional value to breastfeeding and this study proves otherwise.

More from the study:

It’s not clear what the effects of this higher energy and fat content are on a child’s health.

“We showed that the milk of mothers who breast-fed more than a year had a very high fat content,” Lubetzky said. “That contradicts the claim that breast-feeding at this stage has no nutritional contribution. On the other hand, the long-term effect of such a high-fat intake has not been studied.”

“The constituents of fat and human milk are very different than what we provide in formula today. One of the most important constituents of human milk is cholesterol. Formula does not,” Lawrence said. “There are many people who think that probably one of the problems with cholesterol today occurs because infants have not had any cholesterol in the first few months of life; perhaps the body doesn’t learn to deal with it. There are studies that show that young adults have much lower cholesterol levels if they were breast-fed than if they were bottle-fed.”

Still, Lawrence added, this is an area that needs to be researched further.

Lubetzky agreed. “Further studies should analyze this milk fat qualitatively, and try to sort out the influence of prolonged breast-feeding on cardiovascular issues,” she said.

Obviously, since extended nursing is a big part of my and Ava’s lives, this kind of stuff is fascinating to me.

I hope we continue to see more studies and more findings on the results of prolonged breastfeeding, especially in relation to immunities, the avoidance of allergies and the psychological effects. I think there is a lot to be learned.

Here’s another interesting article on extended nursing – Nursing Beyond One Year.