We got a brief respite from the heat today with temps only in the 70s (if that) and even got some very much needed rain! Yay! I took advantage of the cooler temps to do some baking for the party – banana bread and apple cinnamon bread. Both smelled sooooo good coming out of the oven, that it was a serious chore not to eat them right then and there. 😉
Tomorrow, it’s back up to 89 degrees and then into the 90s again, so I’m going to try to get a bit more baking done in the morning to (hopefully) get it all out of the way.

In other news, I cut Ava’s hair yesterday. It was getting so stringy at the bottom, I’d been thinking of taking her somewhere to have it cut but then I broke down and did it on a whim myself. I took about two inches off. It looks pretty cute and the ends are much healthier now.

And in yet other news, Jody felt the baby move two nights ago. 🙂 I was one day shy of 18 weeks. It seems kind of early for feeling such movement on the outside, but I can feel definite kicks with my hands. He/she is a little mover! 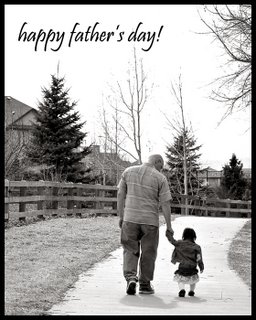 Sunday is Father’s day and we really haven’t planned anything special yet. Perhaps a picnic down by the creek or something. I have a gift for Jody (from Ava) but will have to wait until he gets it to tell you about it.

We do have plans to see some friends (baby Trajan’s family) on Sunday and drop off a meal I’ll be making for them tomorrow as part of our “meals for new families” program that our Attachment Parenting group does. Also will be dropping off some banana muffins to another friend for part of the same deal.

Wonder how Father’s Day came about?
“Father’s Day, contrary to popular misconception, was not established as a holiday in order to help greeting card manufacturers sell more cards. In fact when a “father’s day” was first proposed there were no Father’s Day cards!

Mrs. John B. Dodd, of Washington, first proposed the idea of a “father’s day” in 1909. Mrs. Dodd wanted a special day to honor her father, William Smart. William Smart, a Civil War veteran, was widowed when his wife (Mrs. Dodd’s mother) died in childbirth with their sixth child. Mr. Smart was left to raise the newborn and his other five children by himself on a rural farm in eastern Washington state. It was after Mrs. Dodd became an adult that she realized the strength and selflessness her father had shown in raising his children as a single parent.

The first Father’s Day was observed on June 19, 1910 in Spokane Washington. At about the same time in various towns and cities across American other people were beginning to celebrate a “father’s day.” In 1924 President Calvin Coolidge supported the idea of a national Father’s Day. Finally in 1966 President Lyndon Johnson signed a presidential proclamation declaring the 3rd Sunday of June as Father’s Day.

Father’s Day has become a day to not only honor your father, but all men who act as a father figure. Stepfathers, uncles, grandfathers, and adult male friends are all be honored on Father’s Day.”

Happy Father’s Day to all the daddies out there. Enjoy your day! 🙂

And Happy Father’s Day to my dad. I know he doesn’t read my blog and we don’t have the closest relationship, but he’s been making a lot of positive changes in his life lately and I’m very proud of him for his perseverance.

2 thoughts on “Weekend and Father’s Day”