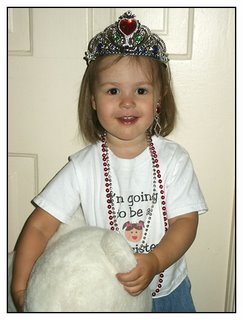 With the birth of baby boy just 10 weeks (or so) away, I’ve been thinking about Ava a lot lately, specifically how fast she seems to be growing up. So I thought I’d take some time to reflect on my girl and where she’s at in this journey called life (and print it out for her baby book too).

Ava is 26 months old (2 years and 2 months for those of you mathematically-challenged) and fiercely independent. She loves to do or try to do things on her own, but has learned to ask for help when she needs it instead of just getting frustrated (though that still happens on occasion too). 😉

Her vocabulary is amazing. Some of the noteworthy things she’s been saying lately are:
–“What you saying, mama/dada?” – when she doesn’t hear or understand what we’re telling her.
–“Why?” – Said for the first time a few days ago. I’m hoping I won’t hear that one again for a little while longer since I know it will soon become a favorite word. 😉
–“I love you, mommy/dada/baby brother.” (Said unsolicited) – Melts my heart every time.
–“I need _______.” Insert pretty much anything in here, from “…to eat,” “…chocolate” – she’s her mother’s daughter, “…to watch my favorite songs” – referring to the Laurie Berkner music DVD grandma bought her, “…to go outside,” etc. The girl has “needs,” not just wants. 😉
–She sometimes calls us *her* mama or *her* dada, like “What are you eating, my dada?” “What are you doing, my mama?”
–“I missed you, mommy/dada.” – After she’s been away from us for a little while. Sometimes she says it to me after she’s napped even. So sweet. 🙂
–“Dangit.” – Her favorite expletive at present. Hey, it could be worse, right? 😉
–She’s started using pronouns (he, she, me, you, her, him) on a regular basis.
–She also knows “Mommy’s name is Amy.” “Daddy is Jody.” and “Mommy is a woman.” “Daddy is a man.” “Ava is a little girl.”
–And she says some pretty cute things. Like the other day when we were driving around and she saw a doggy out of the car window, she said, “Get in my arms, doggy. I want to hold you.” 🙂
–She’s also pretty wise. First, some background info: Whenever Ava gets particularly frustrated, we’ve encouraged her to go hit a pillow rather than throw toys, hit, etc. So the other night Jody was trying to do something and expressed some frustration and she said, “What happened, my dada?” And I told her that daddy was frustrated. And she said, “You need to go hit the pillow.” Dada went and hit the pillow and felt much better. 🙂

We seem to be in the initial stages of potty learning. She woke up with a dry diaper two weekends ago so I encouraged her to sit on the potty. She sat on it until a little pee came out, then stood up excitedly and stopped peeing, saying “Yay, Ava!” So after we made a big deal out of that (and I was quite sure her bladder was still full), I asked if she wanted to try sitting on the potty again, which she did and promptly filled up with the remaining pee. Again, we praised her a lot. Since then she’s also pooped (on about 10 separate occasions) and peed several other times on the potty. After the first poop, she praised herself by saying “Yay Ava,” and then asked me “What happened to my butt?” Hehe. So I explained that the poop came out, etc. Anyway, I’m hoping to give her more opportunities to sit on the potty (i.e. let her run around with a naked butt during the day) and if it happens and she stays interested, great! We’ll continue to praise her like crazy. 🙂 If not, we’ll try again when she’s ready. I admit the idea of having her out of diapers by the time baby brother comes is wonderful, but I’m not going to push her if she’s not ready. So far though, whenever she’s having naked time, she knows when she has to go potty and runs over and goes all on her own!

She’s definitely a caretaker and loves her many babies (all of whom she lovingly calls “Baby Trajan” after our friend’s baby of the same name). She can be very attentive to our needs, and always asks “What happened, mama/dada?” when she knows something is bothering us. She has also started rubbing my back lately when it is sore, then asks, “Is it all better now?” 🙂

She has a great imagination and it’s such fun just to observe her playing. She has even pretended a clothes hanger was a mommy and the pants part of it that hung on it was the baby.

Ava loves to read – both on her own, flipping through the pages alone or having someone read to her. She will often pull out all of her books in a particular room and sit on the floor with them surrounding her as she “reads.” She’s always asking daddy for “one more book” at bedtime.

Waking up beside Ava in the morning is a wonderful way to start my day. She rolls over, puts her arm around my neck and says “Hi, mommy. I love you.” Then we generally cuddle, give hugs and kisses, and talk for 10-15 minutes before getting up to start our day. I’m going to miss that special time with her in a few more months (although, who knows, maybe it will still work out like that). We are in the process of trying to find an inexpensive twin bed to put next to ours so that Ava can sleep there and we can have room for baby brother in the big bed. We had a lead on a great one last weekend, but the lady sold it out from under us. **grumble, grumble**

My nursing relationship with Ava continues. It has it’s ups and downs (as you can imagine nursing while pregnant), but so far the positives have outweighed the negatives. I will write more about nursing while pregnant (the good and the bad) another time. I’m thankful I’ve been able to give Ava this gift of mama’s milk for this long (even though my milk dried up earlier in my pregnancy). I know she and I have both received tremendous benefits from it.

11 thoughts on “Reflecting on my girl”