A topic other than pregnancy today, aren’t you excited? 😉

Jody, Ava, my sis and I went to the city’s kiddie Halloween parade this morning. This was our first year to attend and there was a much bigger turnout than I expected. Kids, kids – everywhere! The weather was perfect for it though – sunny and not too hot and not too cold.

Two high school bands marched in it as well as hundreds of kids and parents. And many other kids, parents, grandparents, etc. stood by to watch the parade. After the parade (which spanned three blocks), several of the downtown merchants gave out candy to all the trick-or-treaters.

We decided to dress Ava as a rockstar this year after how much she enjoyed “Rockstar Supernova” on TV when we’d watch it and how much she enjoys “rockin’ out” with da-da when he plays “Guitar Hero” on the Playstation. 🙂 We taught her to do the rock ‘n roll hand gesture and along with it she says, “Rockin’ out roll!” despite the fact we tell her it’s “rock ‘n roll.” 😉

She happens to be a big fan of The Beatles, so I was quite happy to find her shirt at Target (in the toddler boys’ section) last week. I made her guitar out of cardboard last night as a last-minute costume addition. After I finished it, she walked around the house strumming it and singing a song she made up that went like this, “rock n roll, rock n roll, rock n roll, etc.” 😉 We gave her some punky blue hair today as well, but I don’t think it showed up very well in the pics.

Watching the parade before we jumped in it ourselves: 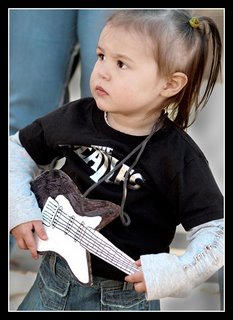 Riding high in the parade with Aunt Carrie and Da-da: 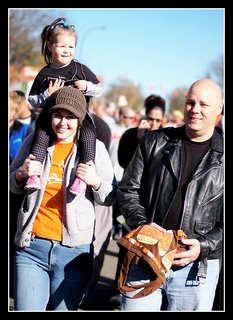 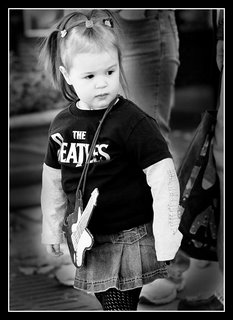 The family (and yes, I am wearing butterfly wings): 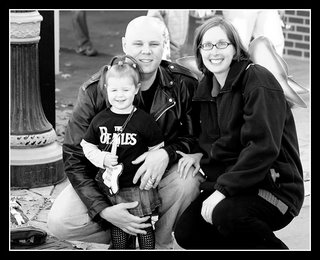