Ah, what the hell. I decided to join in with Katy and the gang over at The Grass Isn’t Greener for SPF – aka Self Portrait Friday. 🙂

This week’s theme is “what do you do to relax” so here are some of the things I like to do to relax.

Mess around on the computer in my pjs: 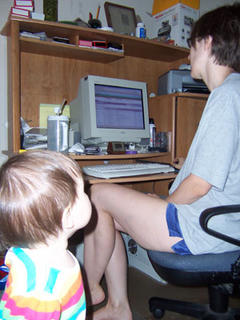 Take a long hot shower (doesn’t happen often with a toddler in the house): 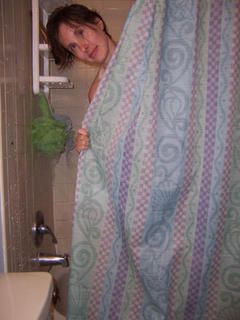 Watch tv (uh, except it’s usually on when I’m watching it): 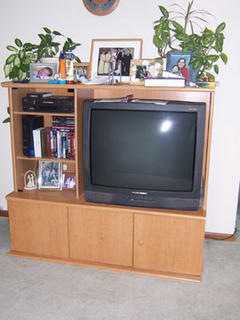 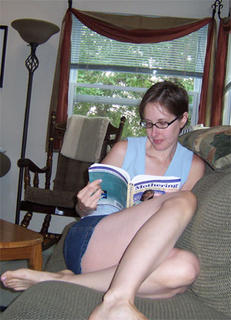 I’m not much of a drinker, but I don’t mind kicking back with some ice cream to help me unwind, so…
Eat ice cream: 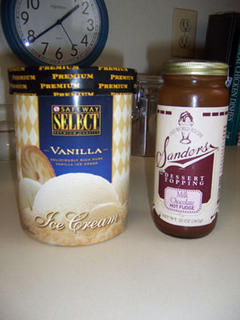 Be sure to check out the rest of the kids to see how everyone else likes to relax. 🙂

It’s been a while since I’ve written about any breastfeeding injustices in the world (not for lack of material, just lack of time). But a few things have surfaced recently in my very own state that have me shaking my head and wondering “what the hell.”

In the Rocky Mountain News:

Five-month-old Nicholas Monroe got hungry Friday while touring the state Capitol with his parents.His mom, 27-year-old Stephanie Monroe, of Rifle, decided that two comfortable-looking couches in the reception area of the governor’s office would be a good place to breast-feed him.

An office receptionist, she says, told her to go somewhere else, suggesting the basement of the building.

The entire article can be found here.

While the receptionist may have been uncomfortable with the woman nursing (though I can’t imagine why since the baby was even covered with a blanket), she had no right to ask the mother to move elsewhere. You see, Colorado passed a state law last year that says a woman is allowed to breastfeed in any place she has a right to be.

How is it that this woman – a receptionist in the governor’s office – isn’t aware that? Beats the heck out of me.

Elsewhere in the state…
In July, a woman breastfeeding her son at Carter Lake was ticketed for “knowingly (exposing) one’s genitals in a public place.” Read the article here.

Since when did breasts become genitals I ask you?! Somebody (the female ranger who issued the ticket) needs an anatomy lesson as well as to brush up on Colorado laws. The ticket has since been dismissed.

One of the things that gets me is that in both instances, it was a woman finding fault with the mother nursing in public (both whom, according to the articles, were doing it quite discreetly). Why are these women to quick to jump on nursing mothers’ cases?

And in national news…
On NBC’s Today Show this week, Dr. Judith Reichman discussed why “breast is best” when it comes to the health of baby and mom.

Dr. Reichman states, “Itâ€™s clear that these experts (American Academy of Pediatrics) feel that infants should be exclusively breast-fed for the first six months of life. And they also recommend that breast-feeding be continued for 12 months with the addition of complementary food. Finally, breast-feeding for the first two years of life is encouraged.”

Sounds great, doesn’t it? Well, it was a WONDERFUL segment (Kudos to NBC for supporting breastfeeding!!) UNTIL Katie Couric opened her big mouth and said that “But when they can ask for it, they are too old, right?” Chuckle, chuckle. And then said something about thinking it’s “creepy” when children ask to nurse.

Wise up, Katie. Do some research and stop interjecting your opinion into stories. It makes for lousy journalism.

By the way, the worldwide weaning average is somewhere between 4 and 6 years.

We’re cutting it just a little too close for comfort with our bills this month. So close that I’m trying to time the mailing of certain bills just perfectly so they are received after Jody gets paid again on the 15th, but before they are technically considered late. Actually some are getting sent late – the ones that don’t have any penalties for being received a couple days past due.

Like our mortgage was due on the 1st, but we have a grace period until the 16th. I mailed it today and hope that it gets there on Monday or Tuesday so the money is definitely there and we can avoid any late fees.

Ugh. How did we get to this point?

Seriously, I don’t think we’ve ever had a month this bad before. Usually there’s no worry about bills getting paid on time or having the money to cover checks. We’ve even been able to afford to send extra money to pay down our one credit card. But it’s back to minimum payments on that for a while.

I’m not sure exactly what happened to get us to where we are now. We did have a few larger purchases recently (a grill and a Dyson vacuum), but we paid for them using our tax return from last year. I think it may be as simple as living on one salary has finally caught up to us. Eep. (Although going over a year has certainly been a good run and I feel fortunate for that.)

Anyway, I’m carefully monitoring our funds and we’ll be living even more frugally for a while as we try to play catch up.

Jody is up for a raise in another month. I’ve got a small business venture in the works to help us make some extra money. And I need to continue to focus on a photography business, but I really am having a hard time with spending money on a new camera that we can’t afford.

I know it will all work out ok, but I hate feeling stuck between a rock and a hard place. Maybe I should start playing the lottery. :oP

My OB/GYN’s office just gave me one more reason why I am so glad to be leaving their practice.

Here’s a little history on why I decided to find a new doctor.
1. Dr. Lame (as I like to call her) never volunteered any information to me while I was in the hospital for 5 days recovering from HELLP syndrome. If I didn’t know the questions to ask, I got nothing.
2. Despite my clear birthing plan that I would be “breathing my baby down,” (as is taught in HypnoBirthing) NOT pushing on command while holding my breath, Dr. Lane instructed me, “Hold your breath while you push!” I refused. (Small victory for Amy.)
3. Despite my best efforts to avoid an episiotomy, Dr. Lame convinced me I was going to tear horribly if I didn’t have one, and in the throes of labor I agreed to be cut.
4. Dr. Lame had no bedside manner what-so-ever.
5. (This is the one that really put me over the edge.) The morning after AVA was born, Dr. Lame asked me how my SON was doing!!! If she couldn’t remember the sex of my child from the night before, she needed to consult my chart (which should have it in there for God’s sake!)!

Anyway, all of these reasons and more made me decide that I never wanted to see the woman again. So when it came time for my annual physical this year, I decided to go elsewhere and request my records from Dr. Lame’s office for my new physician.

That brings me to my story…

I sent in a signed request for my medical records about 5 weeks ago. After not receiving the records in the mail or getting a call asking me to pick them up, I called the office last week to find out if they even received the the request in the first place. “Oh yes, we have it. Can you come in Tuesday morning to pick them up?” “Sure, not a problem.”

Tuesday afternoon (because we got a late start on the day), Ava and I drove to the office to pick up my records. “Oooh, it looks like Dr. Lame hasn’t signed off on them yet. It should be later today or tomorrow. Can I give you a call and let you know?” “Sure, that will be fine.”

Tuesday evening I get a call saying the records are ready. “Come by “anytime.” I interpret “anytime” to mean any time during business hours. Seems straight-forward enough, right?

So today, Wednesday afternoon, Ava and I drive up there AGAIN. We take the elevator to the 2nd floor and walk up to the office. The lights are off inside and there’s a note on the locked door that says “Please leave the mail with the Land Title Office.”

You gotta be kidding me! Where are they?? Strike two!!

Just a little while ago they called and left a message (I had a sleeping child on me and couldn’t answer the phone) to say “I’m so sorry we weren’t here. We’re back now and will be in the office until 5:30/6.”

Did they offer to put them in the mail for me so I don’t have to make a THIRD trip up there? No.

Jody said I should call them back and tell them I have a child (though they probably don’t have that in their records!) and I can’t make five trips up there a day. It’d be funnier if it weren’t so likely.

I just want my stinkin’ records so I can wash my hands of them. Is that too much to ask?

I was working on the computer upstairs in our office tonight while Jody played with Ava in the living room. After about 30 minutes, I heard her chattering as she came up the stairs. She walked up to me looking cute as a bug in her lil yellow jammies. I picked her up into my lap where she immediately began showering me with kisses. 21 kisses to be exact. Yes, I counted them aloud as she kissed me. 😉

In the middle of this, Jody came upstairs to get her. She started signing “milk please” to me (well, really just “please” – she’s dropped the “milk” part of it over the past couple days – guess it was slowing her down) as she continued to give me kisses.

When Jody tried to lean in to steal a kiss, she gave him the stink eye and said “bye-bye.” A few seconds later he leaned in trying for one more and got pushed away along with another “bye-bye.” Aww, poor daddy. He walked away feeling dejected.

Apparently all my kisses were her way of sucking up to me (doh, quite literally) so that she could nurse. 😉 I’m not complaining. It was one of the sweetest things she’s ever done (and that’s saying a lot).

I got a few more kisses when she was finished nursing and then off she went toddling happily back to daddy to play some more.

Here we all were, one year ago (almost to the day). *sigh*

Hope everyone has a great day!